In his latest film, SiCKO, Michael Moore, the acclaimed film maker examines the ailing US health care industry. Rather than examining the challenges of the nearly 1 in 5 Americans who are uninsured, Moore focuses instead on the 250 million Americans who have health insurance coverage. Even those with insurance are not guaranteed health care as evidenced by the cases of several “ordinary Americans” whose lives have been dramatically and often tragically affected by the bureaucratic red tape of the insurance industry. Moore profiles a cross-section of tactics utilized by the for-profit insurance industry including denial of coverage due to pre-existing conditions and failure to secure pre-authorization for emergency services.

Moore squarely places the blame for the broken state of American health care at the feet of the US government; attributing its causes to two factors: profit and fear. First and perhaps more simply, health care goods and services have historically been treated as a commodity within the US. Under market forces, those who can afford to pay receive care, while those who can’t, simply don’t. As health care costs and the incidence of chronic diseases have risen, the number of individuals able to afford and/or qualify for health insurance coverage has begun to shrink. Secondly, and more to the point Moore makes later on in the film regarding values is the question of fear. Moore opines that American health care consumers are afraid of losing choice over their health care providers and long waiting times for procedures. He also suggests that American physicians are fearful of losing the quality of life guaranteed by their coveted six figure incomes. Finally, Moose censures the US government for its use of “red scare” tactics to convince the public that a government operated health system represents a slippery slope into a broader socialist state where the core American value of individual liberty is degraded in favor of the collective. By use of anecdotes Moore picks these arguments apart one by one. He travels to Canada, the United Kingdom, and France gathering tales of satisfied patients, well-paid doctors and even conservative politicians who advocate for government administered health care. While Moore’s comparative analysis offers a mere surface level examination of these systems the fact that each of them offers free universal health care serves as a striking contrast to the pay to play system operating in the richest country in the world. Coupled with the fact that the US health system ranks 37th globally yet spends the most money per capita on health care the viewer is left with the feeling that even for those that can afford it, the American consumer is not getting what she pays for.

Unlike his previous films Moore manages to restrain himself from partisan showboating until the final chapter of the film during which he takes several 9/11 rescue workers to receive health care at the naval base at Guantanamo Bay, Cuba. Deterred only slightly by the land mines surrounding the base, Moore leads his crew away from GITMO to mainland Cuba where many health outcomes are better than in the United States. This slap in the face to US policy drives home Moore’s main message. If Cuba, a developing country can provide free comprehensive quality health care to its citizens, why can’t the US?

As Moore cogently points out many public services in the US are operated as social programs. The police force, the fire department, the public library system and the postal service are all administered by government. Americans widely enjoy these benefits and perhaps most importantly do not expect these services to turn a profit.

Rather than adopting a human rights based approach to health, Moore deals with the US health care crisis as a moral dilemma, one that he suggests can only be changed by a shift in values. In addition to learning valuable lessons from the health systems of other States, the US might also take a lesson from countries who have adopted the values enshrined in international human rights documents on economic, social and cultural rights such as the right to health. After all, the legal documents underpinning the international human right to health consist precisely of the values that Moore advocates for, namely universal (accessible), available, affordable, quality health care goods and services.

The fact that the US has not ratified the International Covenant on Economic, Social and Cultural Rights (ICESCR) which includes the right to health, nor the fact that a US constitutional amendment on the right to health does not exist does not preclude Americans from demanding health care as a public good. After all, the American public expects and demands that primary education is universal and free despite the fact that there is no US constitutional right to education. Rather than a frightening descent into socialism such demands should be seen as the greatest exercise of power within a democracy.

As Moore notes, societies are often judged by how they treat their most vulnerable. In truth socialized medicine already exists on American soil in the form of Medicare for the elderly and disabled, Medicaid for the indigent poor, the Office of Veterans Affairs for former military personnel and the Indian Health Service for Native American populations. In a modern democratic society perhaps the measure by which we judge ourselves should raised so that the United States can join every other industrialized nation in accounting for the health of all of its citizens through the provision of universally free and available health care.

SiCKO will be released in US theatres on June 29. No release date has been set for the UK yet. See http://www.michaelmoore.com/sicko for more information regarding the film.

Unknown said…
I watched the movie last week as well when it was released on the internet, and I think my reaction was similar to your's Dabney, though I am no expert in public health as you are.

I've seen all of Moore's films and some are better than others. This one struck me as among his best, up there with Bowling for Columbine and Roger and Me, because this film wasn't about Moore embarrassing corporate officials or celebrities.

Here, the people's stories were the forefront, and they almost all ended badly: the insurance companies want to turn a greater profit and thus want to restrict wherever possible the claims they pay. Perhaps the most powerful message in the film was that at minimum the US system seems to incentivise witholding care, while in the UK and other socialized systems Doctors are paid more when their patients are healthy.

That said, there are a couple typical arguments that Moore didn't cover, which are thrown about when the idea of socialized health care is discussed in America:

Will the very sick lose out on their ability to get treated for advanced (and expensive) life-safing treatments?

Will drug companies stop researching advanced treatments if they aren't allowed to charge high prices in the US?

Its certainly tragic, but that's the dichotomy that is America. For me, I thought Moore certainly only told one side of the story, but he didn't resort to exaggerations. Even the trip to Cuba rang true for me. He showed people who lost homes, jobs, family members.

I probably enjoyed most the part of the movie when he went to France, and talked to expats about French society, including strikes, and in one of the film's funniest moments asked an affluent French couple what was their biggest expenses: "vegetables, and the feesh". I think he certainly glossed over some problems in French society: the rampant unemployment among the youth, the disillusionment in the suburbs, etc. But for Moore, that's what he imagines America could be if the everyman red-staters stood up for their rights. It's a conversation I've heard many times: wondering about health care, drug prices, yet many of these folks still vote Republican. It's a breakdown in the way people understand their government. Moore's utopia is very Jeffersonian, and perhaps a bit naive, but I'm a sucker for Jeffersonian Democracy.
26 June 2007 at 14:27

Anonymous said…
Moore's film "Sicko" presents an opportunity for Americans to express their wishes for Universal Health care.
What is needed is an effort to distribute petitiions timed to reach departing moviegoers urging the adoption of universal healthcare operated by a government agency similar to Medicare. Those who receive the petition may obtain signatures and also reproduce and distribute the petitions and send copies to their representative and a central coordinating group. This film could generate a million signatures in support of
1 July 2007 at 15:27

Popular posts from this blog

By Ole Windahl Pedersen June 22, 2008
Although a right to “sexual pleasure” usually does not fare among traditional rights enshrined in constitutions, such a right was nevertheless proposed by a female member of the Ecuadorian parliament when debating a forthcoming new constitution. Reuters report that the idea behind the proposal was to facilitate gender equality and to avoid sexual violence. Ultimately, however, and in spite of this noble cause, the proposal failed.
Read more

On Wed, 7 th October at 7pm in Taylor A19 the Legal Research Society will present its first movie night of this academic year with a screening of the film HOT FUZZ, a British action comedy with a huge portion of irony and black humour about the bigotry, hypocrisy and intrigues set in an (superficially) idyllic small town in Britain… Synopsis Sgt Nicholas Angel (Simon Pegg) is a fiercely motivated and successful London copper who finds himself transferred to the sleepy town of Sandford . Almost everyone in this manicured little community seems to know and love each other. But if Sandford is a sleepy market town, it is home to some very real nightmares. Not that local coppers like loveable oaf Danny Butterman (Nick Frost) see anything suspicious about Sandford's absurd number of 'accidents'. Angel is no ordinary constable and launches an investigation, much to the amusement of his bumbling boss and his colleagues. Critics “Refreshingly British co
Read more 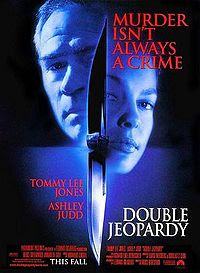 L.R.S has organised A Movie Night (Double Jeopardy) Followed by Legal Discussion on Wednesday 17th February 2010 “Double Jeopardy”, starring Tommy Lee Jones (The Fugitive and No Country for Old Men) and Ashley Judd (Where the Heart is and High Crimes) is a tense and slick American thriller. The plot centres around a fundamental legal doctrine within the American legal system, namely the constitutional protection against double jeopardy (being tried for the same crime twice) afforded by the fifth amendment. It is highly doubtful, however, that the drafters of the American Constitution had in mind the creative use of double jeopardy employed by the film’s protagonist to exploit the fact that she had previously been acquitted of the murder of her husband to do just that without the prospect of going to prison. Although the film is set in America, double jeopardy exists in other legal systems influenced by the common law, including Scotland where there was a recent review of th
Read more